This soup is packed with hearty beans and barley which makes it a filling dinner recipe. Served topped with plenty of parmesan, chopped parsley and a drizzle of olive oil.

I've recently got reacquainted with my pressure cooker and I'm loving it! 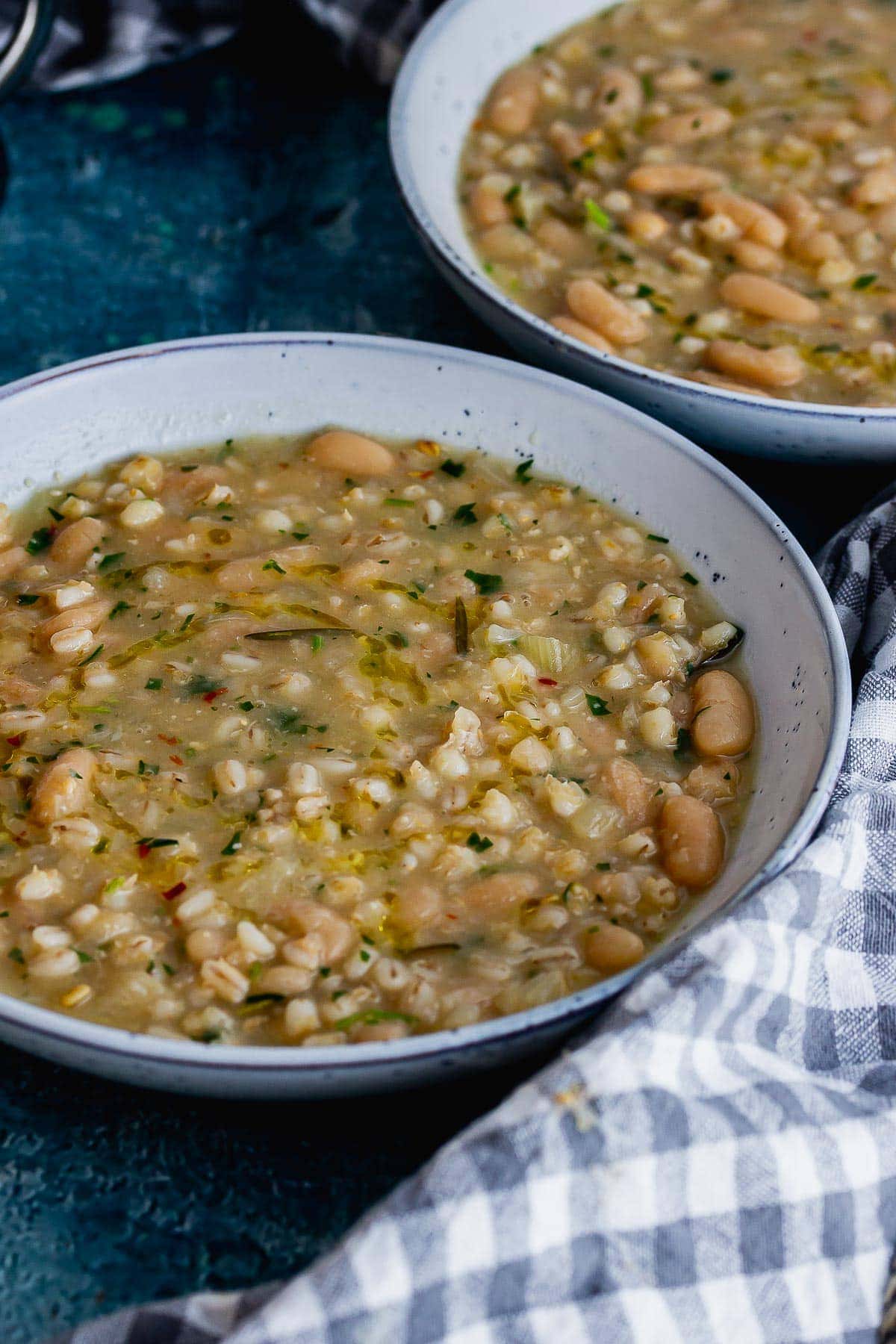 We used to make things in the pressure cooker all the time. Then ours broke so we stopped using it and I kind of forgot how handy it was until we got a replacement a couple of months ago.

They're perfect for soups like this where you can pretty much just chuck everything in and leave it to cook. You don't even need to soak the beans first which is definitely my favourite thing about the recipe as I'm never organised enough to soak them ahead of time.

The other thing I love about this soup is the addition of the parmesan rind. This is such a great tip for whenever you're making soups and stews which need an extra hit of umami flavour. 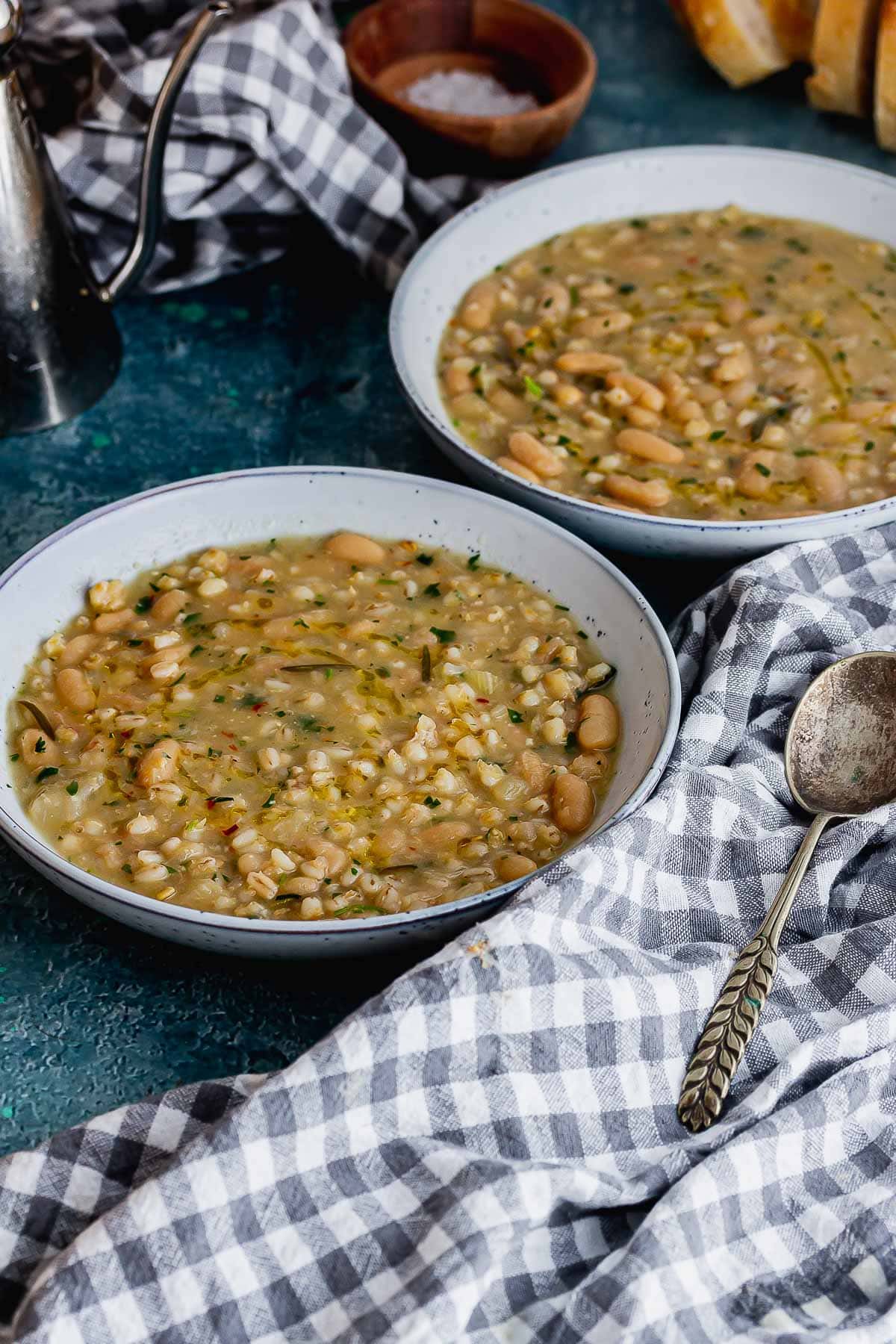 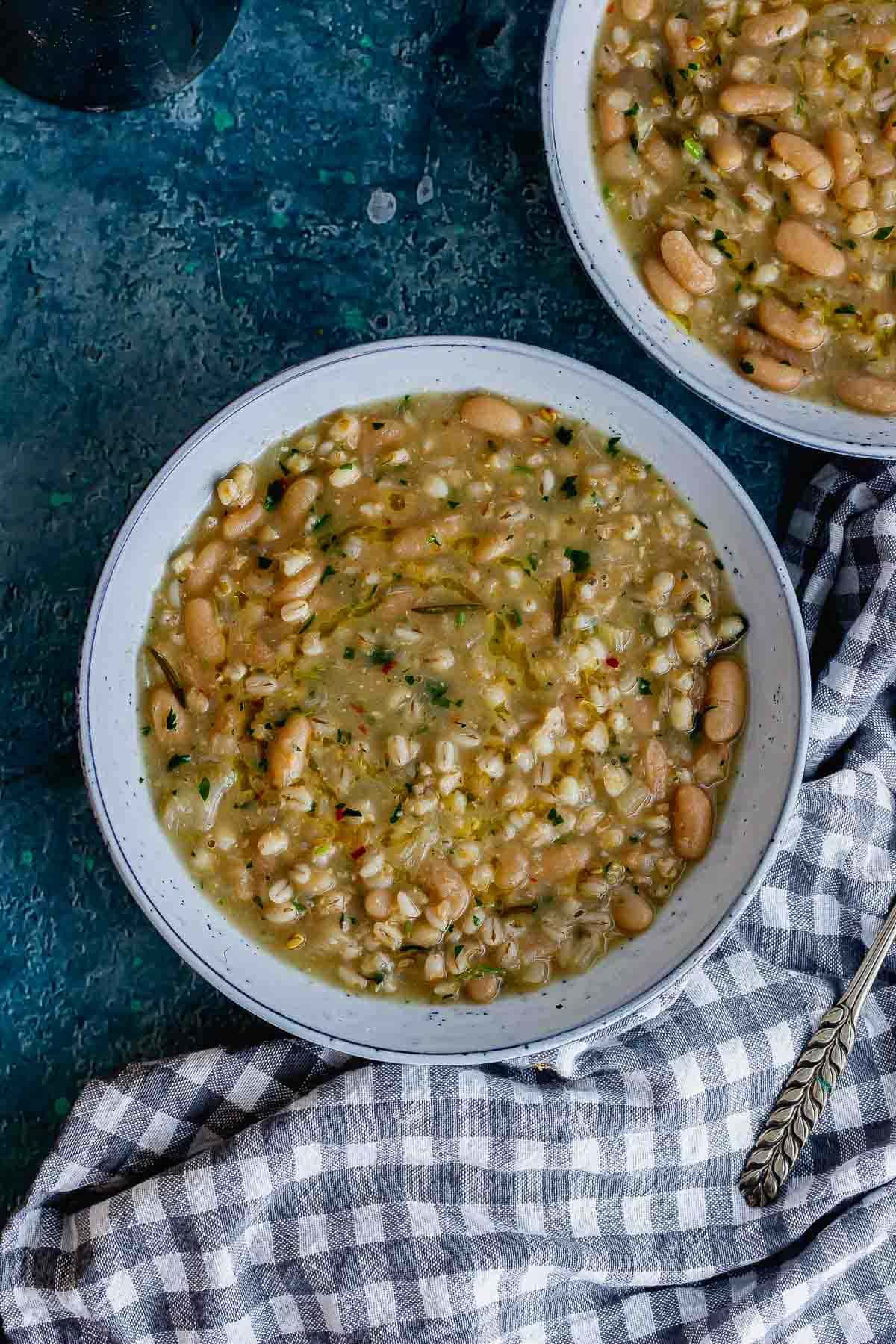 Why we love this pressure cooker bean and pearl barley soup...

It's such a comforting and filling dinner thanks to the beans and pearl barley plus all the rich flavour from the parmesan.

Using the pressure cooker makes this such a simple recipe to put together and massively cuts down on the washing up!

It's easy to make a big batch of this soup and serve it up for lunches and dinners throughout the week.

It's so easy to make this recipe vegetarian by using a vegetarian alternative to parmesan or vegan by leaving it out altogether.

Onion, Fennel & Garlic: This makes up the base of the soup

Herbs & Spices: I use fenugreek seeds, chilli flakes and fresh rosemary sprigs in this soup.

White Wine: Or if you prefer not to cook with alcohol you can switch it for a little extra stock.

Dried Beans: I use cannellini beans but you could use a different dried bean if that's what you have on hand.

Pearl Barley: This adds a nice extra texture to the soup. 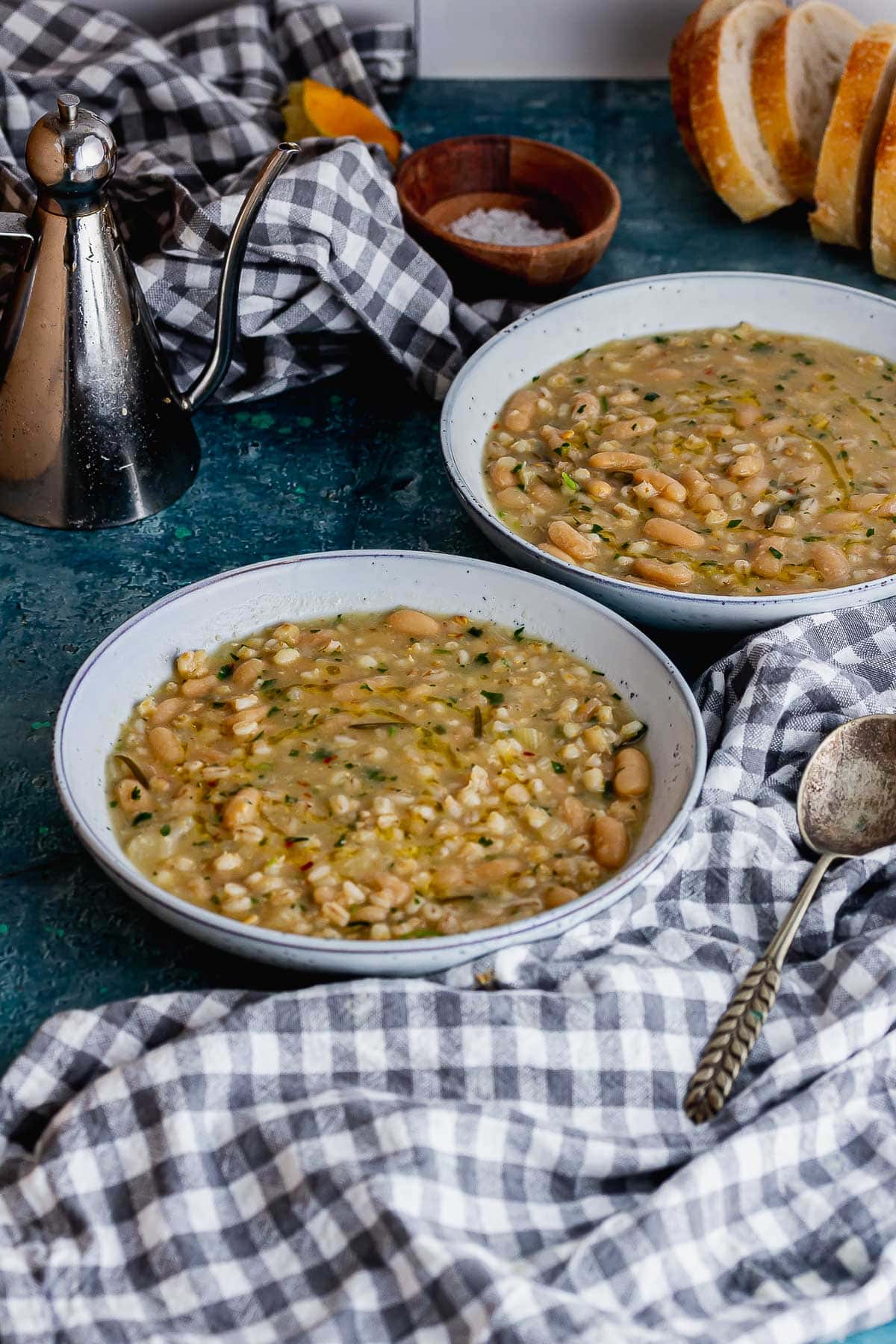 How to make pressure cooker soup with beans and barley

Sauté the vegetables: Add the oil to the pressure cooker and cook the onion for a few minutes followed by the fennel and then the garlic, fenugreek seeds and chilli flakes. Add the wine and simmer for a couple of minutes with the rosemary.

Add the liquids and beans: Add the stock, beans, barley and parmesan rind to the pressure cooker. Add the lid and cook on high for 40 minutes.

Finish the soup: Stir through the grated parmesan and parsley then serve. 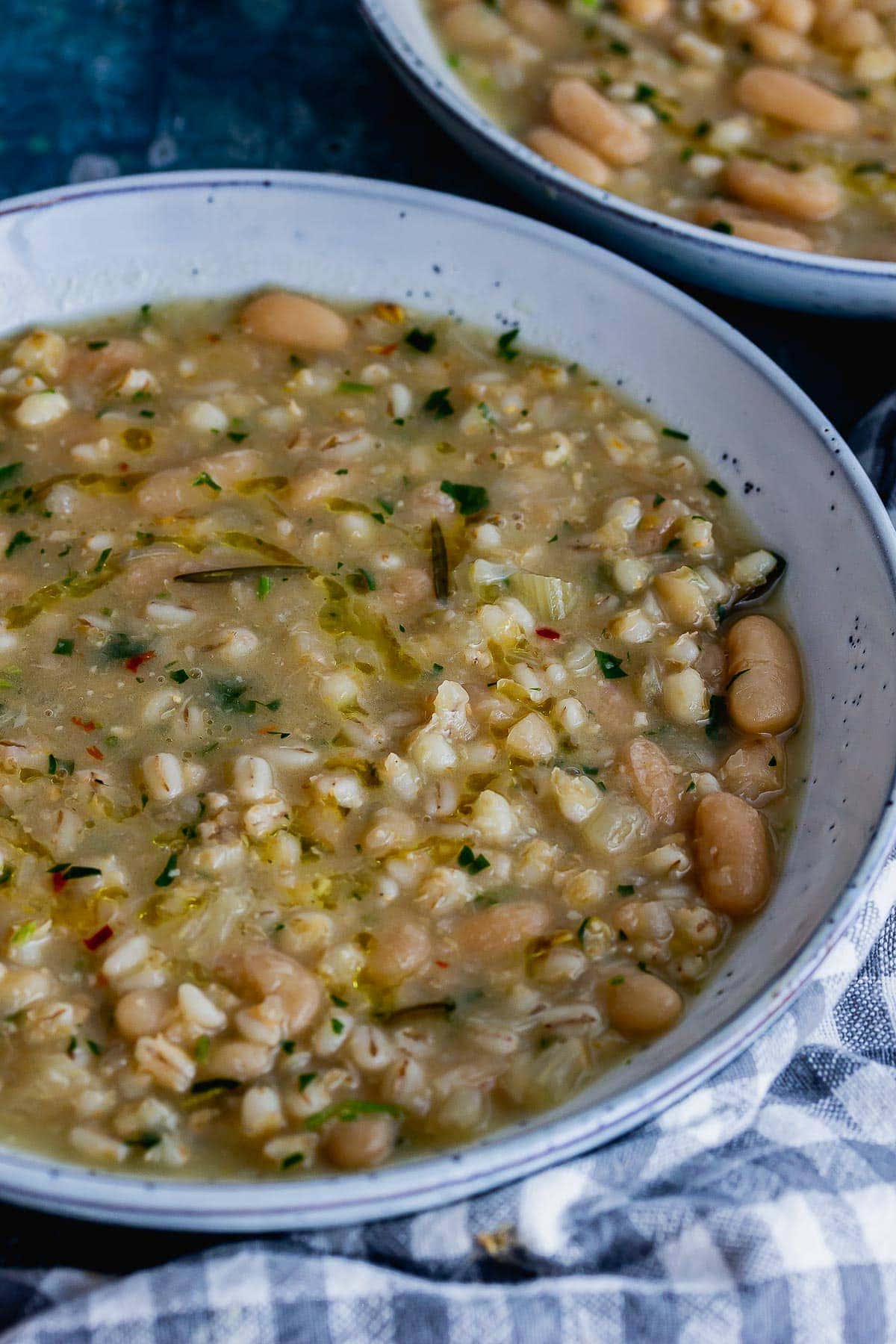 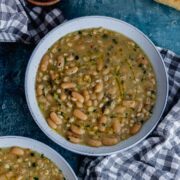 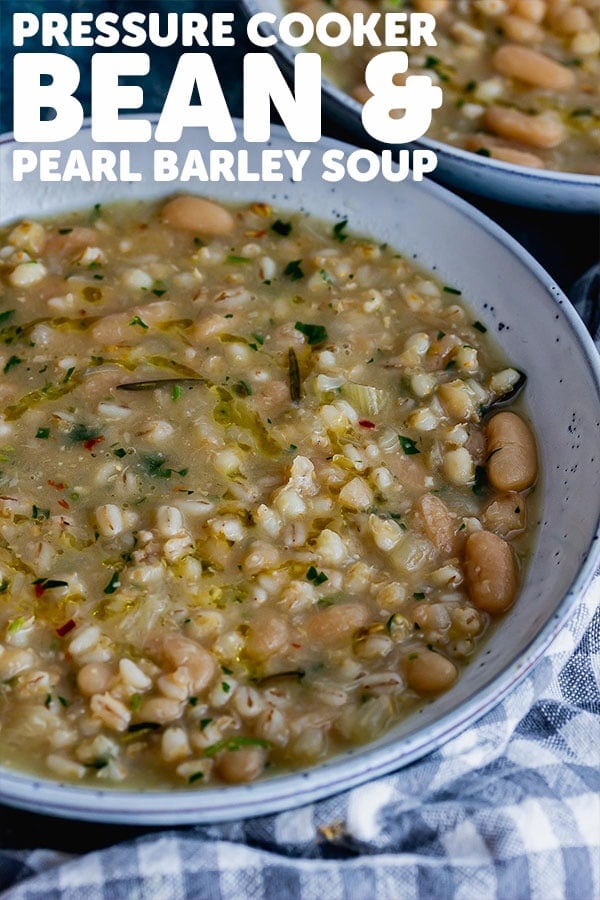