These egg fried noodles are made with flavourful ground pork, udon noodles and oyster sauce. It's such an easy stir fry recipe which makes the perfect midweek dinner.

The recipe has the most amazing flavour!

Plus the pork has an incredible texture thanks to tossing it in a little flour before frying which makes it slightly chewy and slightly crispy which are the exact textures I'm looking for in my dinners.

We've also got thick and chewy udon noodles. I used straight to wok noodles which saves pre-cooking them before adding them to the stir fry.

Once you've fried your pork and broccoli you simply scramble in some whisked eggs, add your sauce and toss in the noodles before mixing everything together. Delicious!

Why we love these egg fried noodles with pork...

This is such an easy recipe which takes just a few steps to put together and uses mostly pantry ingredients.

It has so much incredible flavour thanks to all of the aromatics mixed into the pork mince and the addition of soy sauce and oyster sauce tossed with the noodles.

You can add extra veggies to this recipe to make it healthier. As well as the broccoli you could try adding pepper, baby corn or asparagus.

If you don't fancy pork you could switch it out for beef, turkey or chicken for a different flavour.

This section is here to provide further tips and ideas for alternative ingredients. The full recipe and instructions are included in the recipe card at the bottom of the post!

Flour: Tossed with pieces of the pork mixture before frying to get them extra crispy.

Broccoli: Cut into florets and stir fried with the pork.

Eggs: Whisked and then scrambled right in the wok with the pork.

Udon Noodles: Use straight to wok noodles to make this recipe super quick.

Stir Fry Sauce: A mixture of oyster sauce, soy sauce and sesame oil is added to the stir fry to bring everything together.

How to make pork noodles with broccoli

Fry the pork: Heat the oil in a wok or large frying pan. Add the pork and fry until brown and crispy. Add the broccoli and fry for another couple of minutes then push everything to one side and pour in the egg. Scramble slightly as it cooks.

Add the noodles: Add the noodles and toss with the egg, pork and broccoli. Pour in the oyster sauce, soy sauce and sesame oil and toss again before serving. 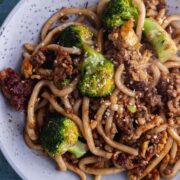 Nutrition information is an estimate and will vary depending on the ingredients used.
Did you make this recipe?Tag @amycookreport on Instagram and hashtag it #thecookreport!